[ Michel Olivier in an interview
with Mikołaj Janiw, 1st year student
at the New Media Arts Faculty of PJAIT ] 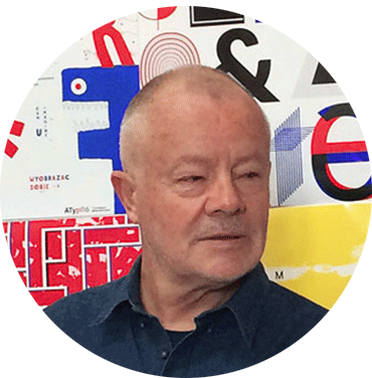 What would you suggest is the essence of visual communication, the word or the image?
Word = Exchange
Image = O in Bodoni

An important factor in the area of graphic design is the search for communication and understanding, for instance between diverse cultures and languages. Do you believe it is possible to find a universal visual language and if it is, in what way can we work it out? How can we speak so as to be understood?
There are some areas of graphic design, where this universal visual language is already in use. Road signs and symbols used in public spaces (airports, public transport etc.), are good examples of that.

You are an experienced graphic designer. Have you ever encountered a surprising and unintended interpretation of your work?
Let me share some specific examples with you:
The France Abonnements logo (ill. 1), which I created in 1984. It was a work designed for a competition in which, I remember, eight other designers took part. My logo is still in use and that is something quite surprising to me.
Logo for Jean-Louis Étienne (ill. 2), a doctor and a scientist, who built the ship Antarctica, currently known as Tara. Jean-Louis Étienne used this logo during his expeditions to both the North and South Pole. The location of the logo on the ship was altered in accordance with the ship’s destination. Poster created in 1993 for Type Directors Club (TDC) in New York (ill. 3). This poster expresses my fascination with typography and my admiration for the work carried out by the group Emigre.

In an era referred to as ‘the unification of graphic design’, or as some prefer to call it, in a world where ‘everything has been done’, what in your opinion are the main challenges facing the new generation of designers?
I think that some differences will persist due to a diversity of artistic cultures around the world. I believe that designers will deploy those differences through new technologies.

What do you think about the dialogue between Polish and French students, which was a part of the Text Message project? What connects and what divides us? And above all, is it possible in the modern world to listen carefully to each other and to look closely at the messages we receive from others?
Poland has preserved a distinctive graphic culture. Culture based on the traditional typographic and design practices, which is clearly visible in the contemporary works of Polish designers. To me, Polish graphic design is an important point of reference in the design world.

Michel Olivier is a French designer, typographer and lecturer at the École intuit.lab where he is also the Head of Global Communications.